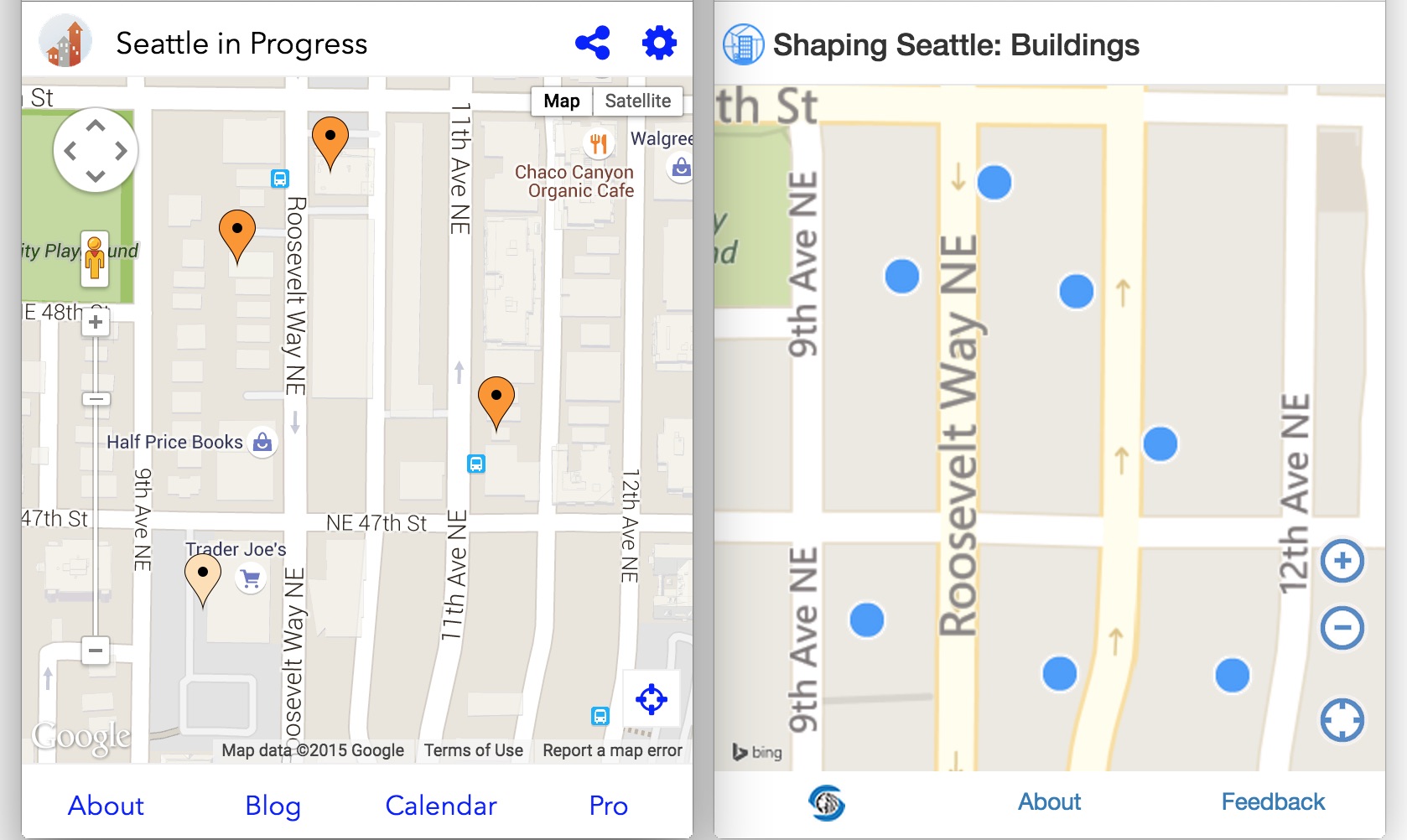 Two views of U-District construction: Seattle in Progress next to the City’s new site.

There are plenty of differences between the two sites, but the most important issues to many users are comprehensiveness, timeliness and accuracy. In all of these respects, Seattle in Progress equals or beats the City’s own site.

In terms of comprehensiveness, Seattle in Progress is working with the same official permit databases as the City’s site. Seattle in Progress loads the complete dataset automatically, without any manual data entry that would allow for errors or omissions.

In terms of timeliness, Seattle in Progress updates its data every night through entirely automated mechanisms. This contrasts with the City’s app, which relies on City staff to manually capture and upload a screen shot from each new design proposal. If the City falls behind on this daily task their site will become out of date.

You’ll notice some other functional differences if you play around with the two sites. Seattle in Progress lets you swipe through the pages of the design proposals on your phone or desktop; the City’s site requires you to download a large PDF, which is slow on desktops and nearly unusable on a phone. Seattle in Progress provides a calendar of upcoming meetings and lets you subscribe to calendar updates over email, Twitter or Facebook; the City’s app has no easily accessible calendar. Seattle in Progress colors pins by project status and gives you the option to include single-family construction; the City’s app shows only larger projects and makes no attempt to distinguish the pins of proposed, approved or completed projects.

When Seattle in Progress launched in November 2014 I had hoped to be able to collaborate with the City. Unfortunately, despite strong support from City staff, I wasn’t able to get any decisions makers to engage in a substantive discussion. Still, the City’s attempt to replicate Seattle in Progress validates our efforts: as a civic technologist, one of the the most impactful outcomes I can hope for is to push government to improve its own technology.

GeekWire has more coverage of what happened: City of Seattle Takes Cues from Indie App.

The City will hopefully make improvements to their site over time. In the mean time, there are a number of great new features in the works for Seattle in Progress (many of which are available today in our Pro version). Stay tuned for more announcements soon.

Seattle in Progress is a desktop and mobile web app for seeing what's being built in your neighborhood. Our goal is to promote a more informed public discussion about development in Seattle. If you haven't already, check out the main site.